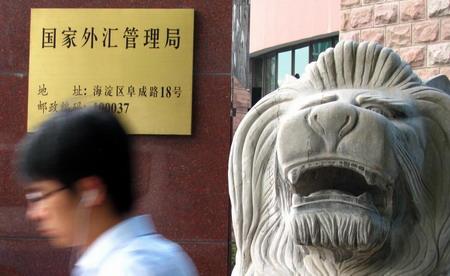 A pedestrian walks through the entrance of the State Administration of Foreign Exchange. [Nan Shan / for China Daily]

"Europe was, is, and will be one of the major investment markets for China's foreign exchange reserves," the State Administration of Foreign Exchange (SAFE) said in a statement.

The regulator remained confident that Europe will overcome its current financial difficulties, the statement said. "We support the series of financial stability measures taken by the European Union and the International Monetary Fund," it said.

Europe is part of SAFE's investment portfolio because it adopts a diversified investment strategy, which ensures stable returns.

China has kept its foreign exchange reserve assets "generally safe" during the global financial crisis. "We have had quite good returns in 2008 and 2009, when the crisis was hitting (the global economy) the hardest," the statement said.

Book gains from rising asset prices have far outweighed valuation losses caused by the appreciation of the yuan, the agency said.

None of China's foreign exchange reserves were invested in high-risk assets such as the US subprime mortgage-backed bonds, which helped ensure the safety of its investment security, the SAFE said.

US mortgage finance giants Fannie Mae and Freddie Mac were taken over by the US government during the financial crisis and delisted from the New York Stock Exchange last month. Since then there had been criticism that China's investment in them was unwise.

But SAFE said its investments in bonds of the two companies have not been affected. "The reserves have not been invested in stocks of Fannie Mae and Freddie Mac and the interest and principal repayment of their bonds are proceeding normally; prices are stable," it said.

"We will closely monitor developments regarding them to safeguard the security of foreign exchange reserve assets," said the SAFE statement.