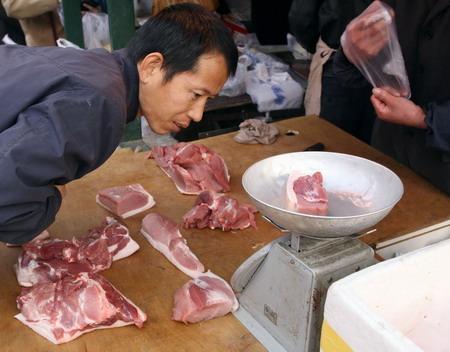 A man checks the scales before buying a piece of pork at a market in Beijing. Rising pork prices may be a source of uncertainty in the second half of the year. [Agencies]

BEIJING - Despite the expected year-on-year rise in China's consumer prices in June, inflationary pressures will continue to ease as the price index drops month-on-month, analysts said.

The Consumer Price Index (CPI), the main measure of inflation, rose 3.1 percent year-on-year in May from 2.8 percent in April, hitting a 19-month high, but on a month-on-month basis, it has weakened 0.1 percent, according to the National Bureau of Statistics.

The bureau is scheduled to release economic data for June and the second quarter on July 15.

Most analysts predicted a CPI of 3.2 to 3.3 percent in June year-on-year while the month-on-month figure would descend due to declining food prices.

Zhu Baoliang, an economist with the State Information Center, said the index would continue to climb year-on-year before reaching its peak in August, mainly due to a lower statistical basis last year.

But the successive monthly decline would continue as the supply of seasonal vegetables improved significantly and prices have gone down, he said. In May, China's CPI dropped by 0.1 percent month-on-month.

According to statistics from the Ministry of Commerce, in the first three weeks of June, declines in the prices of vegetables, fruit and poultry all exceeded those in May.

Zhu said although price increases in meat, eggs and aquatic products rose by a bigger margin in June than the previous month, their increases could not offset declines of other food and non-food prices in the basket of CPI measurement.

Historically, except for 2007 and 2008, food prices in June are usually lower than that in May, said Lu Zhengwei, chief economist of Industrial Bank.

Food prices account for 32.6 percent of CPI, the biggest component in the CPI basket.

"What's more, prices of other goods usually witnessed month-on-month declines except in 2008, which helps drag down the index compared with the previous month," said Lu, who predicted June CPI would drop by 0.3 to 0.6 percent month-on-month.

Tang Jianwei, a senior analyst with the Bank of Communications, said inflationary pressures in the second half would ease significantly and CPI for the entire year could stay below 3 percent, meeting the government target.

He said the widely expected slowdown in economic growth in the second half as a result of the real estate tightening measures, and the appreciation of the yuan would help ease the pressure along with declining global commodity prices.

However, rising prices of grain and pork may be a source of uncertainty in the second half of the year, some analysts warned.