India may lift curbs on cotton exports to China

India may lift curbs on cotton exports to China

MUMBAI - Cotton output in India, the second-biggest grower, may rise to a record next year as farmers boost planting and yields rebound on normal monsoon rainfall, spurring expectations the government will end restrictions on exports. 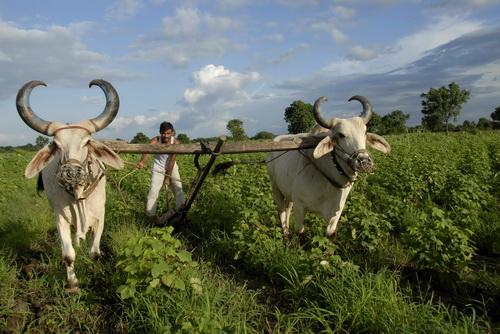 A farmer plows a cotton field in the village of Hasti, Maharastra, India. A bigger cotton crop may help the country lift curbs on overseas sales. [SANTOSH VERMA / BLOOMBERG NEWS]

Production may total as much as 32.5 million bales of 170 kilograms each in the year starting Oct 1, up from 29.2 million bales, said D. K. Nair, secretary-general of the Confederation of Indian Textile Industry, in a phone interview from New Delhi.

A bigger crop may help the country lift curbs on overseas sales to countries including China, the biggest cotton user, and increase competition for suppliers from the US and Uzbekistan. Resumption in shipments from India may weigh on cotton prices, which have gained 35 percent in the past year as US farmers reduced planting in favor of wheat and soybeans.

"A decision on freeing exports may come in October, by which time the government will have a clearer picture about the crop," said Veeresh Hiremath, an analyst at Karvy Comtrade Ltd, by phone from Hyderabad.

India in April curbed exports to rein in prices and bolster domestic supplies, and said traders would need a license to sell abroad. Shipments from Oct 1 to June 15 were 7.38 million bales, almost double the 3.84 million bales a year earlier, data from the textiles commissioner's office showed.

China, Pakistan and Bangladesh are among the main buyers of Indian cotton. China will increase its import quota by almost one million tons and sell more from State stockpiles to fill a supply shortfall, the China Cotton Association said on June 25.