Canada seeks to beef up its industry

Canada seeks to beef up its industry 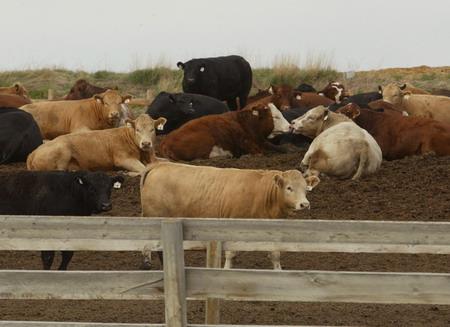 As first stage of import ban is lifted, Ottawa looks for big gains from its herds of Angus, Hereford, Simmental and Charolais cattle

BEIJING - The guest of honor was dressed meticulously, a handsome sight and the focus of rapt attention from the assembled dignitaries, businessmen and journalists in the luxurious trappings of a private room in Beijing's Park Hyatt hotel. 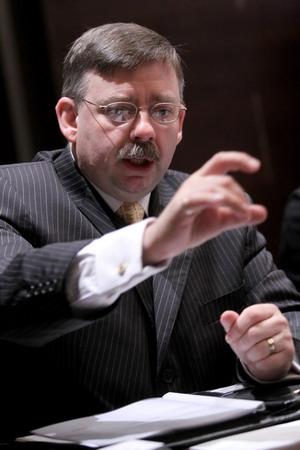 The Chinese capital had not witnessed an event like this before. In fact, the guest had been banned from the country for the past seven years amid dark mutterings of disease and distrust.

But on this occasion there was great fanfare and an open-armed welcome.

Yes, beef from Canada is back on the menu in China and its return was being afforded the gastronomic equivalent of a state visit by foreign royalty.

Standing as equerry to the succulent sirloin, the spare ribs and the tender chucks was Ted Haney, president of the Canada Beef Export Federation. For him it was the culmination of many years of negotiation and diplomacy, long and arduous meetings and endless phone calls spent hammering out the fine details.

However, those expecting to witness the happy glow of victory on his moustachioed and bespectacled face would be disappointed. To borrow from the British wartime leader Winston Churchill, he knows this is not the end. It is not even the beginning of the end. But it is, perhaps, the end of the beginning.

Back in 2003 a cow in Canada was discovered to have bovine spongiform encephalopathy (BSE), otherwise known as mad cow disease, a fatal neurodegenerative, or brain-wasting ailment that, according to many scientists, can be transmitted to human beings who eat the brain or spinal cord of infected animals. In humans the disease is known as new variant Creutzfeldt-Jakob disease (vCJD). In the United Kingdom, the country worst affected by the disease, it had claimed the lives of 166 people by October 2009.

China's reaction was swift. Along with other countries, it immediately banned all beef products from Canada, thereby delivering a heavy blow to a lucrative export business for the large but sparsely populated North American country that relies heavily on overseas trade to maintain its economic well being. In 2009, Canada ranked 10th in terms of total global beef production. In terms of global exports, it ranked third with the inclusion of live exports. Now with China's market re-opening, it aims to rank even higher.

Scientists discovered BSE developed in cattle that had been fed meat meal and bone meal made from infected animals as a protein source. It wasn't until July 2007 that the Canadian Food Inspection Agency, the federal regulator responsible for monitoring the safety of Canadian cattle, put into place a ban on cattle tissues capable of transmitting BSE from all animal feeds, pet foods and fertilizers. This followed a 1997 ban on feeding ruminant meat and bone meal to other ruminant animals. 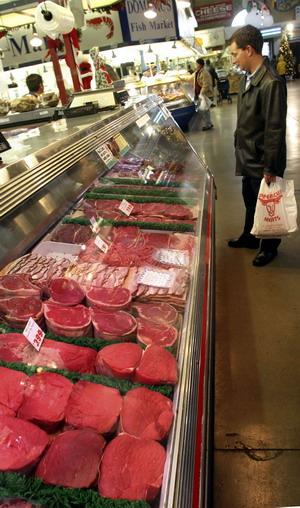 A shopper contemplates a purchase of beef from a butcher in Toronto's historic St Lawrence Market. Chinese President Hu Jintao and Canadian Prime Minister Stephen Harper signed several important agreements in Canada late last month in fields ranging from trade to tourism, and pledged to double the volume of two-way trade to $60 billion by 2015. According to the new deals, the Chinese will get to enjoy Canadian beef again as the country resumes imports. [Agencies]

For a country that likes to boast of the high quality of its beef raised courtesy of vast regions of natural feed, clean water supplies and an invigorating climate, it was a painful period and a financial blow for an industry worth 38.7 billion yuan in 2009.

Before the BSE crisis, Canada's beef and veal sales to the Chinese mainland peaked at C$7 million (2,700 metric tons). Its tallow sales peaked at C$35 million.

Negotiations on a resumption of trade were not helped when Canadian Prime Minister Stephen Harper criticized China over human rights issues and held an official meeting with the Dalai Lama.

So it was with a huge sigh of relief in Ottawa on June 24 that the Canadian government announced it had reached agreement with the mainland, the world's fourth largest beef consumer, to allow market access for Canadian beef and tallow. Imports will resume in stages starting with boneless beef from animals aged under 30 months and beef tallow for industrial use, according to a Canadian government statement following discussions between Chinese President Hu Jintao and Harper.

According to the Canadian Cattlemen's Association (CCA), an Alberta-based trade group, Canada may now export C$50 million ($48.1 million) in tallow and boneless beef annually to China during the first stage of the agreement. Exports may rise to C$110 million "once full access is established to include bone-in products," the CCA said. The move will help Canada maintain and grow its standing as one of the world's largest beef exporters and may be followed by talks on lifting a ban by China on beef imports from the US. Jim Miller, the head of the US Department of Agriculture's Foreign Agricultural Service has received a letter from Wei Chuanzhong, a vice-minister at China's quality inspection agency, indicating an interest in lifting the veto.

"Canada is bringing to our international clients a strong and renewed commitment to achieving export growth," Gib Drury, board chair of the Canada Beef Export Federation, told a seminar late April in Shanghai. "We are delivering a Canadian cattle identification system, age-verification, world standard food safety and animal health systems - and the high quality grain-fed Canadian beef taste and quality that has been demonstrated to meet your needs. There is a great enthusiasm for Canadian beef in all our priority markets and we have seen, as market access is regained and normalized, export volumes increase substantially.

The federation's international representatives have worked hard to maintain relationships with importers, distributors and end users. These, our customers, have enjoyed great success with Canadian beef and are eager for the opportunity to do so again. In this great market in China, that opportunity has arrived."

China's per capita beef consumption is 4.7 kilograms annually compared with a world per capita consumption level of 10 kg. Ted Haney sees his job now as developing demand in China for the products from Canada's herds of Angus, Hereford, Simmental and Charolais cattle. Beef exports to Asian markets from Canada have been witnessing double digit growth in the past few years. Hong Kong fully lifted restrictions on Canadian beef in December last year, while trade with Macao was normalized in 2004.

"Canadian beef is the product of a world class industry, leading animal health and food safety systems, an internationally respected regulatory system and a superior grading system," said Haney, whose federation has set a target of selling more than half of its annual 800,000 tons of beef exports to Asian and Mexican markets by 2015, with 37,000 tons going to China alone by that date.

China's beef output reached 6.1 million tons in 2008, a year-on-year decrease of 0.5 percent, according to data from the Ministry of Agriculture. The Foreign Agricultural Service of the US Department of Agriculture expects China to become a net importer of beef this year, with imports growing 30 percent to 30,000 tons, mostly from Australia, Uruguay and New Zealand. The department estimates an additional 100,000 tons of beef enters China every year through gray channels, mainly from Brazil and the US.

With his foot firmly back in the door, Haney now plans a marketing blizzard while continuing efforts to lift the ban on Canadian beef in South Korea - "another very important market place".