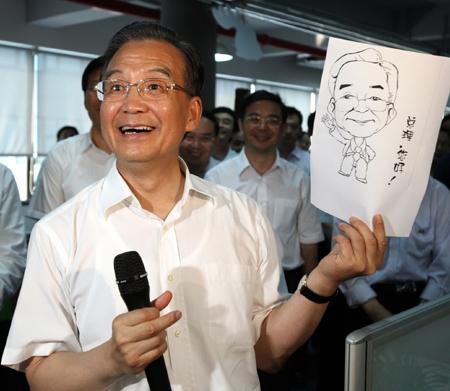 Premier Wen Jiabao receives a cartoon of himself as a gift on Friday during a visit to Talkweb Information System Co Ltd in Hunan's provincial capital Changsha.[Xinhua]

CHANGSHA: Premier Wen Jiabao has warned that China's macro-economic control policy is facing mounting difficulties, with the severity of the international financial crisis and the unpredictable nature of the global economic recovery.

"China's current economy remains good, but the domestic and international environment is extremely complicated," Wen said while addressing a symposium on Saturday in Changsha, capital of central China's Hunan province.

The symposium, which was presided over by Wen, was held to examine the economic situations in three provinces: Hubei, Hunan and Guangdong.

At the symposium, Wen repeated the government's stance in maintaining the continuity and stability of macro-economic policies, as well as making these macro policies more flexible and targeted.

Wen said the government would "work to promote stable and relatively fast domestic economic growth, restructure the economy and manage inflation expectations to ensure the government's goals for 2010 are met".

Before the symposium, Wen inspected flood prevention and control efforts in parts of Hunan on Thursday, before he moved on to Changsha, the provincial capital, where on Friday he visited a number of other venues, including machinery, outsourcing and animation companies.

While inspecting the companies, Wen enquired about their business activities, employment and social security, and encouraged them to step up innovation.

Wen also spoke with employers and job hunters at a job market in Changsha. He told female university student Yan Youping that the priority for students is to study hard and acquire skills at school. He also advised students to be clear about their personal demands and to prepare themselves for the future.