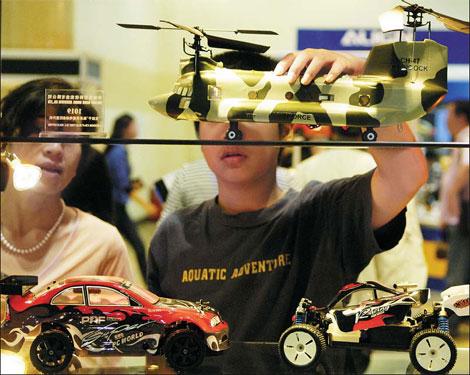 A visitor at a toy exhibition in Beijing. Toy sales were boosted by the festival season. [Photo: China Daily]

The million-dollar question in the domestic toy industry is always about predicting which toys will be the best-seller for the festive season, especially during the festive season when retailers and toymakers hope for sales to soar.

While the leading candidate for must-have toy is the iPad, followed by, perhaps, a Nintendo Wii game console, Chinese toymakers and retailers are counting on yoyos as well as remote-controlled cars and helicopters to ring in the new year.

The Guangdong Toy Association told China Daily that Guangdong-based toymaker Alpha is proving a hit with Chinese children and adults alike, including foreigners in China - through its cartoon series Blazing Teens and Race Tin - where blazing yoyos and remote-controlled (RC) cars were popularized.

The association said it expects the domestic toy market to experience stable sales in this season, thanks to the recovery in the global economy.

"In this season, I think it's the infrared 3D helicopters and RC cars," said Lily Teng, a sales assistant at a toy store in Sanlitun Yashow Clothing Market, which is a popular spot with tourists and foreigners living in Beijing.

"You name it small, big helicopters with gyroscopic system (which uses motion and rotation sensors to navigate) and cars are popular with my foreign and Chinese clients."

Buyers get to choose RC cars from models such as the AMG-Mercedes CLK, Honda NSX Super GT, Toyota Supra Super GT or the Subaru.

While these flashy cars are fast and furious, other buyers are also eyeing the blazing yoyos and are spoiled for choice with catchy names - Phoenix Spirit, Fire Thunder, Storm Eagle, Sonic Dragon, Fire Diamond, Regal Speed or Grey Fox - to suit players' style.

The blazing yoyos allow players, both beginners and advanced, to achieve tricks once thought impossible such as looping and smooth spins.

"The RC cars and helicopters are my best-sellers. Foreigners and locals, male and female are getting them for their sons, husbands, boyfriends or friends," said Cao Daoming, owner of a toy store at Hongqiao Toy Market. "Foreign classic cars for decoration purposes are also popular."

China has more than 6,000 toymakers with nearly 5,000 based in Guangzhou, Guangdong province.

Chinese children's average toy consumption is $20, behind the $401 in Australia and $280 in the United States, industry figures showed.