Over 3,000 Chinese Evacuated from Quake-hit Areas in Japan

Over 3,000 Chinese Evacuated from Quake-hit Areas in Japan 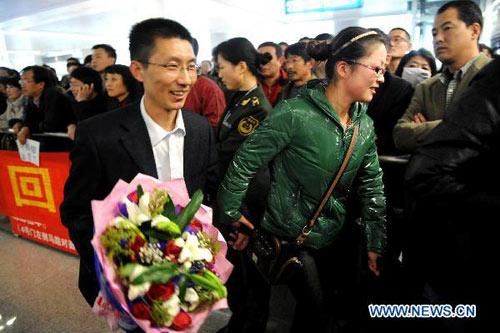 A Chinese passenger (L) departed from Japan arrives at an airport in Qingdao, east China's Shandong Province, March 16, 2011. China is rapidly withdrawing its nationals from the areas worst hit by a devastating earthquake and ensuing tsunamis in Japan as severely damaged nuclear power plants there are posing a safety threat. [Photo: Xinhua/Li Ziheng]

More than 3,000 Chinese nationals have been evacuated from the worst-hit areas following last week's massive earthquake and tsunami in northeast Japan, Chinese diplomats said on Wednesday.

Gong Xiaodong, an official of the Chinese General Consulate in Niigata, told Xinhua over telephone that more than 3,000 Chinese nationals have been evacuated to Niigata from the three worst hit prefectures -- Miyagi, Fukushima and Iwate.

Gong said the consulate has provided shelter and food to the Chinese and will also help them return home if they wish to.

About 600 Chinese left for home on Wednesday and more frequent flights from Niigata to China have been arranged, she added.

In Sendai, prefectural capital of Miyagi, 20 buses were dispatched on Wednesday to pick up some 1,000 Chinese and take them to Niigata, a Chinese embassy official said.