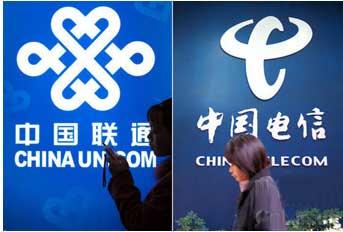 China Unicom, China's second-largest mobile carrier, said in a statement yesterday that it has always provided broadband services strictly "in accordance with the relevant laws and regulations," in response to an anti-monopoly probe by China's top economic planner.

The company is cooperating with the the National Development and Reform Commission (NDRC) and will provide the data it needs, the statement said.

The two companies may face a combined fine of up to 8 billion yuan (US$1.27 billion), if evidence against the duo found by the National Development and Reform Commission are true, the report said.

The commission started the investigation after receiving complaints, said Li, a deputy head of the NDRC's anti-monopoly bureau. The investigation marks a rare case of antitrust laws being targeted at state-run companies.

The two companies, accounting for 85 percent of market share in the broadband access segment in China, were blocking other corporations from entering the broadband market with their dominance, the complaints alleged.

The probe so far has showed that the two have taken advantage of their dominance by charging full price to market rivals while offering discounts to others if they are not threatening to their businesses, Li said.

He called that price discrimination, an illegal practice.

To save on costs, the two also declined to connect up to 75 percent of their broadband network capabilities, which has slowed down Internet speed for users in China.

The companies may face fine equivalent to 1 percent to 10 percent of their revenue. China Telecom's 2010 revenue from the Internet access business sat at 50 billion yuan, while that from China Unicom was close to 30 billion yuan, Li said.

China's Internet speed is much lower than the world average and Shanghai has the slowest speed nationwide, a report published by the China Internet Network Information Center said in January.

The report, based on a survey of 60,000 people nationwide, showed Henan, Hunan and Hebei provinces were the top three in Internet speed while Shanghai, Jiangsu and Tibet were the last three. Beijing was in 13th place.

China Telecom is China's largest broadband Internet supplier, with 73.7 million subscribers by the end of September, while China Unicom has 54.5 million users, according to data the firms released last month.

Shanghai Daily contributed to this story.