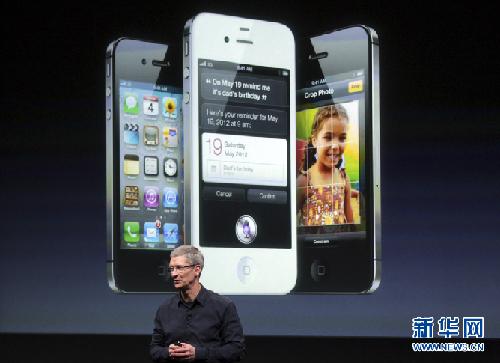 At the event held at Apple headquarters in Cupertino, California, U.S., newly installed Chief Executive Officer Tim Cook took stage to give a general introduction of Apple's products, his first product presentation after taking over the reins from Steve Jobs in August.

According to Apple, there are several key features that make the new iPhone 4S different from the current iPhone 4. With a 3.5- inch widescreen multitouch display, the new device features dual- core A5 processor, the chip used in the iPad 2, and a higher- resolution eight megapixel camera which can grab 73 percent more light and take a 1080p high-definition video.

The battery can support internet use up to six hours on 3G network and nine hours on Wi-Fi, as well as talk time up to eight hours on 3G and 14 hours on 2G.

Based on the dual-antenna design of iPhone 4, Apple said that iPhone 4S can intelligently switch back and forth between them to send and receive, improving the reception and throughput on the device. The iPhone 4S is also a world phone, which means both GSM and CDMA network customers can roam internationally on GSM networks on a single phone. It also supports HSPA+, a 4G mobile technology that allows for data transmission speeds up to 42 Mbps.

For example, Siri understands users who are looking for a weather forecast when they ask questions like "Do I need an umbrella today," "What's the upcoming forecast," and "Is the weather going to get worse today."

The iPhone 4S will run the latest version of Apple's mobile operating system iOS 5, which will be available as free update next Wednesday. The new iOS 5 has more than 200 new features, such as a deep Twitter integration, Notification Center and iMessage, a new messaging service.

The latest smartphone also comes with the launch of iCloud, Apple's cloud computing service which automatically and wirelessly store users' content and push it to all Apple devices from mobile devices and music players to desktops and notebooks. Apple will launch iCloud next Wednesday.

"iPhone 4S plus iOS 5 plus iCloud is a breakthrough combination that makes the iPhone 4S the best iPhone ever," said Philip Schiller, Apple's senior vice president of Worldwide Product Marketing. "While our competitors try to imitate iPhone with a checklist of features, only iPhone can deliver these breakthrough innovations that work seamlessly together," said Schiller, who led the iPhone 4S introduction at the Tuesday's event.

The new iPhone 4S will start at 199 U.S. dollars with a storage capacity of 16 GB and 399 dollars for the 64 GB model. The pre- orders begin on Friday and the phone will ship next Friday. Apple said that iPhone will be in 70 countries and regions, on 100 carriers when the roll out is done. In the United States, along with AT&T and Verizon, iPhone 4S will also come to Sprint, the third-largest mobile-phone carrier in the country.