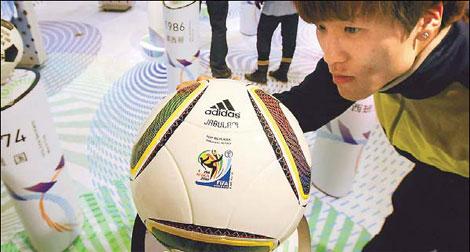 A man looks at a 2010 FIFA World Cup authorized football in a sports shop in Beijing. The global sporting event creates branding opportunities for various businesses. [Provided to China Daily]

BEIJING -- China Central Television (CCTV), the exclusive broadcaster of the 2010 FIFA World Cup on the mainland, has blown the final whistle for bids on advertising slots for the global sporting event.

He Haiming, vice-director of CCTV's Advertising Department, told China Daily that the last batch of advertising slots, including the exclusive titling rights for some special programs and slots for individual matches, will be made available to bidders in mid-April.

In November 2009, the national broadcasting giant first began auctioning off prime-time advertising slots for the 2010 World Cup, which is slated to kick off in South Africa on June 11.

Huang Shengmin, dean of the Advertising Department at the Communication University of China, said that the value of the World Cup, in terms of brand promotion, is higher than either the Olympic Games or the annual Spring Festival Gala, which were among the most expensive events to buy advertising time for on TV.

"The one-month event is similar to a TV series. Audiences will be keeping a close eye on every match, which are all crucial to the final outcome. And fan enthusiasm will be at fever pitch when the final match arrives," Huang said.

"Intensive advertising during the World Cup is highly efficient as audiences will translate enthusiasm from the games to the products or brands they see on TV everyday during the games," Huang added.

Luo Ming, vice-director of CCTV, said this is the ninth and most complex CCTV broadcast of the FIFA World Cup.

Coverage will include 74 journalists following 64 matches aired on five channels, including one high-definition channel.

"With comprehensive coverage integrating all media resources including China Network Television (CNTV.cn), China's first national Internet TV launched by CCTV in late 2009, we will create as many business opportunities for our clients as we can," Luo added.

Previously, CCTV paid about 2 billion yuan for the broadcasting rights to the 2002 World Cup.

CCTV declined to say how much they would be paying for this year's broadcasting rights, but added the price for the games in South Africa have gone up significantly based on the success of the Chinese economy and strong viewer interest by soccer fans.