Hard choices in the battle against inflation

Hard choices in the battle against inflation 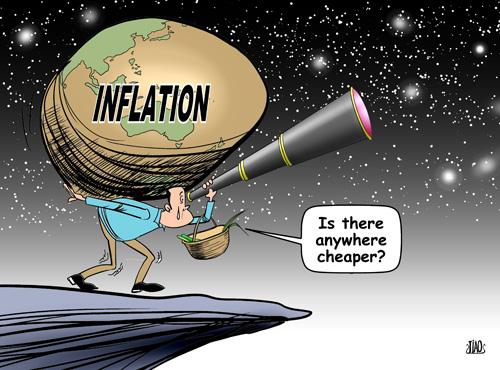 The top priority for emerging economies recently has been reducing inflation. China's consumer price index (CPI) rose to 5.1 percent in November 2010, higher than expected. Measures to control inflation are in place and in December the CPI is expected to decline. But it is hard to see any tightening of global liquidity, so the battle to reduce inflation in emerging markets will be a protracted one.

It is only a few months since China was playing down inflation expectations. But inflation eventually arrived. The momentum of economic recovery in Europe and America is sluggish, and America is showing no signs of tightening global liquidity. Given these factors, emerging markets are virtually certain to experience longer term inflation.

The subtle consequences of inflation

So it is natural that China has adjusted its macro-policy. Monetary policy has been switched to "prudent" from "moderately prudent". The markets were expecting China's central bank to raise interest rates last weekend. But in the end it only raised bank reserve requirements.

Some think that excessive tightening will harm the economy; some believe monetary policy is the key tool. Others think China should raise interest rates as early as possible, and in particular move them into positive territory. The different views reflect the numerous difficulties confronting China's economy. Policy needs to focus on various targets.

In 2011, the first year of the 12th five-year plan, China will continue to implement a proactive fiscal policy and a prudent monetary policy. Economic restructuring and improving the people's well-being will remain priorities. If liquidity is excessively tightened, new contradictions will appear.

Although the growth of GDP cannot be the sole aim of policy, a slip in growth rates must be guarded against, since it would bring with it not only economic problems, but also social problems.

Sharing the fruits of economic development more fairly will become one of the main ways of improving people's well-being. To increase the income levels of people on medium and low incomes is a major challenge facing the government.

China's policy makers face difficult choices on macro-control. Some commentators suggest that by raising reserve requirements but not interest rates the central bank highlighted the delicate balance between curbing inflation and boosting economic growth. Controlling domestic liquidity is a difficult issue, not to mention upward pressure on the yuan.

Some suggest that price increases are a repetition of similar scenarios in the past. But there are problems with this point of view. Inflation has appeared in a context of a sound currency and abundance of material goods. According to China's State Statistics Bureau, purchasing power jumped in November but the increase is not so big if the hike in the price index is taken into account.

In brief, to ensure sound economic growth the government should not rashly launch new projects, and should clamp down on inflation. Adjustments to macro-policy should reflect the concrete situation and should not be carried out mechanically.

(This post was first published in Chinese and translated by Wang Yanfang.)