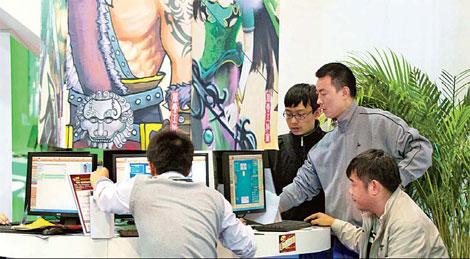 The Internet is expected to overtake newspapers in advertising revenues in China by 2012 as more and more advertisers take advantage of the country's booming online market, according to a new report by the Data Center of China Internet (DCCI).

Online advertising revenues are forecast to reach 46.1 billion yuan ($6.95 billion), exceeding the 42.39 billion yuan earned by newspapers, by 2012, and become the second-largest media for advertising in the country, said the report.

Internet users in China totaled 450 million by the end of November, and represented around 34.8 percent of the population, but online advertising only accounted for 11.2 percent of the market.

"Companies will surely spend more and more on Internet marketing in the future, even though they still have to figure out how to use the Internet well," said Chen Gang, associate dean at the School of Journalism and Communications at Peking University.

"Traditional media, however, have begun to experience a 'warm winter'," he said, explaining that although the adverting revenues of traditional media are increasing, growth is slowing and will continue to do so.

Chen said that newspapers don't compete in a fully market-oriented environment, a factor which poses difficulties for the sector to integrate resources and therefore influences the advertising performance of newspapers.

The country's online advertising market will continue with its prosperous growth as advertisers begin to recognize the marketing value of online videos, social networking sites and other types of Internet products, said the report.

The biggest advertiser online last year was the computer industry, accounting for about 36 percent of total online advertising spending, followed by autos, clothing, and real estate, according to the report.