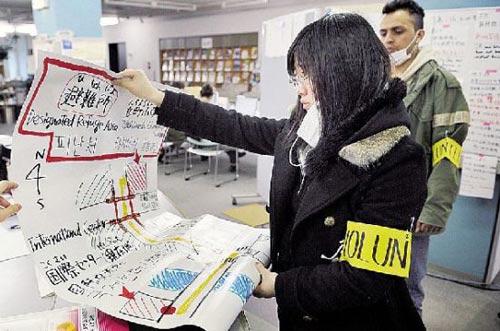 "I will not leave until there are no more calls," said a Chinese student named Niu Haili, who served in a temporary multilingual service center set up in the International Center of Sendai, a severely afflicted quake-hit area in Japan, the Legal Evening Post reported on Wednesday.

Most of Niu's classmates have been evacuated from Sendai amid fear of a nuclear radiation leak caused by the earthquake. Niu said she could not leave at the moment as the center is in dire need of volunteers. She had been continuously serving in this center for five days and four nights since the earthquake struck on March 11.
Niu arrived at the international center two hours after the earthquake happened. Then she ran to the local broadcasting station and announced the latest quake news and emergency calls of the centre with another student in four languages within a limited five minutes.

After she went back to the center, she worked with other overseas students and established the multilingual service center on the second day of the disaster, which can provide help to foreigners and overseas students from different countries. The volunteers in this center come from different countries including the United Sates, South Korea and Germany.

Niu said she had answered nearly 400 emergency calls, including international calls inquiring about missing persons. Most of calls are from Chinese people seeking help.

She also received one call on Tuesday from Dalian in northeast China's Liaoning Province calling for the search of 28 Chinese people missing in the tsunami in Miyagi. Niu immediately contacted several quake-stricken victim shelters and local security bureaus to ask for information.

Though there was no confirmed information about these people, Niu said she would not give up inquiring and pressing local related departments to follow up on the missing people.

The Ministry of Commerce (MOC) said Tuesday that 261 Chinese people were not able to be contacted in Japan's quake-hit regions as of 10.00am. Local commerce departments and the China International Contractors Association had succeeded in contacting 22,155 Chinese people in Japan's quake-stricken areas and there were no reports of Chinese casualties.