Mobile Internet development was a hot topic at the Third Cross-Strait Internet Development Forum, which opened in Beijing Tuesday morning. Delegates from across the Taiwan Straits called for greater cooperation in the promotion and development of the mobile Internet sector. 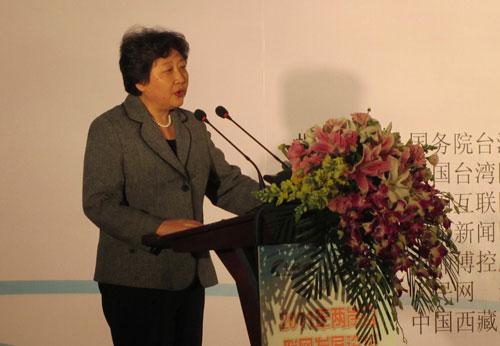 Wang Xiujun, chief engineer of the Ministry of Industry and Information Technology (MIIT) speaks at the opening ceremony of the Third Cross-Strait Internet Development Forum in Beijing on Nov. 15, 2011. [China.org.cn]


"Due to the rapid development of mobile Internet, we have witnessed a boom of mobile services, including mobile TV, mobile reading and payment services," said Wang Xiujun, chief engineer of the Ministry of Industry and Information Technology (MIIT). She added: "The development also accelerates the spread of third-generation (3G) networks and smart phones in China, as well as relevant telecommunication, financial and entertainment services."

However, Taiwan experts called for greater development of the Chinese mobile operating system and user interface. "Apple s operating system is the most attractive feature of its products," said Charles Y. P. Huang, Deputy Secretary General of the Taipei Computer Association (TCA). "Google developed the Android system and Microsoft has Windows 8. The mainland and Taiwan have the most mobile Internet users in the world, so there s a great opportunity to develop a user interface in Chinese."

MIIT data showed that the number of Chinese mobile phone users hit 952.31 million by the end of September, 102.46 million of whom are 3G users.

According to the China Internet Networks Information Center (CNNIC), China's population of Internet users hit 485 million by the end of June this year and according to MIIT s statistics, the number of people accessing the Internet through mobile phones had already reached 318 million by the same time period.

In addition to mobile Internet, delegates will discuss such issues as e-commerce, digital content and online education.

The previous two sessions of the forum were held in Beijing and Taipei in 2009 and 2010, respectively.