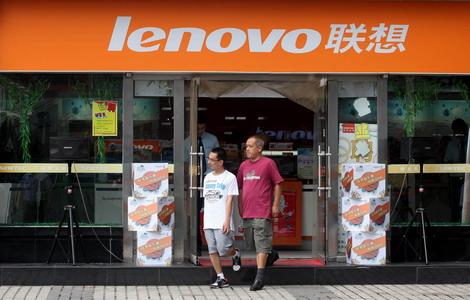 Consumers leave a Lenovo store in Beijing. The PC maker's sales in mature markets exceeded those in China for the first time in the third quarter, generating $3.3 billion and accounting for 42.6 percent of the company's global sales. [China Daily]

Lenovo Group, the largest Chinese PC maker by market share and the second-largest globally, will apply greater pressure to its overseas competitors in mature markets, including the United States and Europe, following the appointment of a new Chairman and CEO, Yang Yuanqing, on Nov 3.

"In the last three years, Lenovo has been mainly focused on the Chinese market. Now the company plans to place greater emphasis on overseas markets," said Yang.

Lenovo is the world's second-largest PC vendor, with a record market share of 13.5 percent between July and September, according to International Data Corp.

The company attributed the growth to previous acquisitions and surging sales in overseas markets. Yang announced that the company plans to increase investment and effort in those consumer markets where it doesn't yet have a strong share.

"As the biggest player, Lenovo holds around 20 percent of the market for government and big business globally," said Yang. "Businesses refreshing their hardware will provide more opportunities to further growth next year." However, he also admitted that the company is eager to expand its consumer market too.

The update of the Windows operating system next year will stimulate sales of commercial computers, said Raphael Vasquez of the US-based IT research company Gartner Inc.

According to Lenovo, mature markets, such as the United States and Japan, contributed more than $100 million of the company's profit last quarter. Meanwhile, sales revenue in the mature markets exceeded that in China for the first time during the third quarter, coming in at $3.3 billion and accounting for 42.6 percent of the company's global sales.

Lenovo was one of the first Chinese companies to enter the global market and compete with overseas brands. After buying International Business Machines Corp's PC business in 2005, the company announced a $175 million joint venture with Japan's NEC Corp in January and the acquisition of Medion AG, a German multimedia and consumer electronics manufacturer, in July.

Lenovo's special consultant Gianfranco Lanci, the former CEO of Acer Inc, said the company's sales channel in Germany has been fully used by Lenovo following the acquisition of Medion. Reconstruction of other aspects of the business model will be completed by the end of this year.

However, Lenovo's competitors, such as Dell Inc and Hewlett-Packard Corp (HP), reported a strong presence in the mature markets during the second quarter. HP reported profit of around $1.93 billion for the second quarter and Dell reached $890 million, while Lenovo's profit was only $108 million.

The new chairman said the company will shift focus from growing its market share to increasing profits in mature markets through the introduction of more mobile Internet devices such as smartphones and tablet PCs.