Queues out in HK for latest iPhone

Queues out in HK for latest iPhone 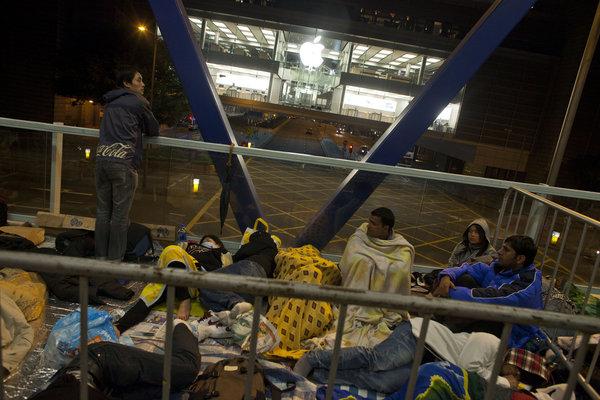 Apple fans wait outside an Apple store in Hong Kong before the new iPhone 4S goes on sale at 7am on Friday. [CFP]

Apple's latest iPhone 4S went on sale in Hong Kong today, creating a buzz as more than 1,000 people queued outside the Apple store yesterday to try to get their hands on the must-have gadget.

The Apple shop was to start selling the new phone at 7am, with people allowed to buy up to five each.

Security guards split the queue into smaller groups outside the Apple store at IFC shopping mall yesterday afternoon after the number of people queuing up reached as high as 1,300, Hong Kong media reported. Police were present to maintain order.

To keep track of people, security guards put them in groups of 25. When someone had to leave for a toilet break or for food, Apple shop staff would take their pictures with a digital camera.

For some, buying the new phone is an opportunity to make quick money by reselling it. People from all walks of life scrambled for profit, including Filipino maids, people from the Chinese mainland, people of South Asian descent (Indian and Pakistani), and even local gangsters, Apple Daily, a Chinese newspaper in Hong Kong, reported yesterday.

Lau Chi Kong, owner of a shop in Hong Kong that sells smuggled mobile phones, said the reselling price of iPhone 4S 16GB and 32GB are HK$6,300 (US$805) and 6,800 respectively, which is HK$1,000 higher than the retail price, according to Chinese news website 3hk.cn.

IPhone 4 user Sally Wong, a marketing executive in her early 30s, told Shanghai Daily she is not going to buy iPhone 4S. She bought iPhone 4 last year and is not attracted by the new functions of iPhone 4S.

Wong was critical of those lining up overnight, saying they "just want to make money."

"The incident shows people in Hong Kong are so materialistic," she said.

Twenty-eight-year-old Wong Ka Ming wants to buy the iPhone 4S to replace the iPhone 3GS he is using. He made an order at the Apple shop last Saturday.