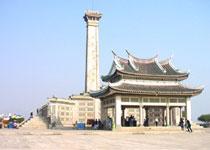 Go over on foot since collect the aesthstic village, Ao garden is being collected by the American middle school.

Ao garden is made up of porch, monument, good age tomb. The numerous carving in the garden are the mood treasure of art of Fujian stone carving. Collect the beautiful liberation monument, it is the subject building of Ao garden. Front was inscribed in one s handwriting by Chairman Mao Zedong Collect the beautiful liberation monument . It is an only once that Chairman Mao inscribes and liberates the tablet name of the monument in a town. Collect an island on the beautiful southeast seashore originally, there is a small temple on the island, call Ao s head palace, have another name called one thousand li of palaces, Anti-Japanese War period, is destroyed by the Japanese aggressor troop. In 1950, Mr. Chen Jiageng built Ao garden on the ruins.
The whole garden covers an area of nearly 9000 square meters, by the porch, collect the American liberation monuments, Chen Jiageng tomb three parts to make up. Building in the garden and carving, reflect he resides and teaches visiting, residing the thought which teaches Yu Le, a great deal of respects of including China and foreign countries at all times, astronomical geography, scientific and technological culture and education, calligraphy painting, animals and plants, industrial and agricultural production etc., extensive and profound, all-embracing, it is a natural science grand sight. Porch 50 meter long, Chinese-style the intersection of Wu and corridor, four to penetrating, two wall inlay, engrave and carve by 58 the intersection of historical personage and blue and green stone of story, it is 653 pieces of quintessence of stone carving of Ao garden. The enclosure outside the porch, there are 291 various stone carvings, there is famous name of Chinese all circles it is inscribed that couplet written on scrolls of the classic s calligraphy flows, the calligraphy is superior, it is consummate to carve the skill, it is the mood treasure of art of Fujian stone carving. Cross the porch, namely can see the subject building of Ao garden collect the beautiful liberation monument. The tablet is 28 meters high, build up of granite, symbolize China Struggle through 28 years, has made the victory of people s democratic revolution. The name of the tablet is inscribed and the handwritten tablet inscription in one s handwriting. The stone railing of pedestal of the tablet, are carving efficacious beast and exotic flowers and rare herbs of various rare birds. It turns over screen walls facing the gate of a house to be the intersection of Chen Jiageng and mausoleum of Mr., tomb hold son to noon, take the form of longevity tortoise, tomb build until 13 hexagon blue and green to fight stone inlay, spell. There is biography relief of 15 Mr. Chen Jiageng in the column screen inboard wall of tomb, a rectangle visits the pavilion in front of the mausoleum. Mr. Chen Jiageng mausoleum is a Chinese Key Cultural Relic Unit under State Protection.