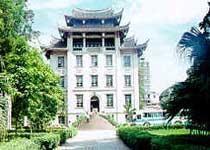 1,2,15,18,21,Bus No. 45 gets to the first two stations of Xiamen University The museum stands) Get off, the first station is egret s large station (the large words that started of tall building do not have this station, go to the museum to stand directly at the second stop) .