Companies may report 60% growth in net profit for 2009

BEIJING: Listed property companies may on an average see a 60 percent increase in 2009 net profit and report even stronger numbers this year, industry analysts said on Thursday.

According to Wind Info, a financial statistics provider, nearly 115 companies, accounting for almost half of all the country's listed realtors, will report an average annual profit increase of around 205 percent. 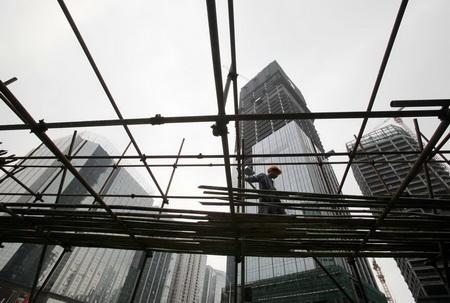 A worker at a construction site in Guangzhou. Property prices and sales in China s key cities accelerated in the second half of 2009, enabling realtors to report handsome pro ts. [CFP]

"We expect the financial performance of real estate companies to be even better in 2010, as the balances on home purchases from the second half of 2009 will be included in this year's numbers." said Fang Yan, a senior analyst with Shenzhen-based Guosen Securities.

Property prices and sales in China's key cities accelerated in the second half of 2009, enabling realtors to report handsome profits.

With many of the sales proceeds likely to accrue this year, it will further strengthen the balance sheets of the companies.

Fang said it is an opportune time to buy real estate shares, as the valuations are attractive.

Since July last year, the property stocks index has dropped more than 25 percent, compared to the 10 percent fall in the Shanghai Composite Index.

"Based on our calculation, the average price/earning ratio of first-tier real estate firms will range from 15 to 18 this year, which is attractive for investors," said Fang.

"The major players in the country or in certain regions are ideal investment targets, like Zhongtian Urban Development Group, China Merchants Development and Gemdale."

"Transaction volumes rebounded in March and with no tightening policies expected in the short term, it is an opportune time for investors to buy the shares of these companies," Zhou Hu, an analyst at Bohai Securities, said.

"Property sales may get a boost from the anticipated yuan appreciation as realty would be seen as an advantageous tool," said Fan.

Investors can also gain, as realty purchases made with the yuan will be cheaper than foreign currency buys.

Though property sales and prices may not soar as much as last year, they will still be on the growth track.

The land price record for residential housing in Beijing was broken twice on Monday, with nearly half of proposals being made at record high prices.

"That means property developers are still optimistic about the market prospects this year, and they are still awash with cash," said Yang Shaofeng, managing director of Conworld, a Beijing-based property brokerage.

Besides the land price record, the average price in Beijing's real estate market continued to rise in the first two months of this year, with nearly 20.49 billion yuan ($3 billion) of investment so far, a 71 percent increase over last year.

According to data from the Beijing Municipal Statistics Bureau, property prices rose 18.1 percent in February compared with January.

The average residential price in the country will probably climb to 4,851 yuan to 4,976 yuan per square meter by the end of this year, said a joint study by the policy research center under the Ministry of Housing and Urban-Rural Development and China Real Estate Index.

It said that the growth rate will range from 3.3 percent to 6 percent, while the floor space sold this year may dip 4.4 percent to 6.5 percent over 2009.