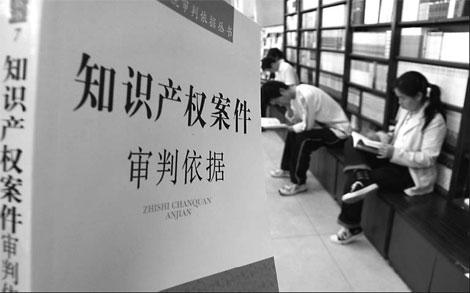 A law book on judgements in intellectual property cases. Experts say the field in maturing and awards are increasing in value. LIU JUNFENG / CHINA DAILY

It proved to be more than a tempest in a teapot for two Chinese companies ordered to pay 9.1 million yuan in damages to Strix Ltd, a leading maker of electric kettle components based in the Isle of Man.

The ruling by a Beijing court earlier this year against Zhejiang Jiatai Electrical Appliance Manufacture and Leqing FaDa Electrical Equipment drew the attention of international media, which acclaimed it as progress in judicial protection for intellectual property in China.

"This legal decision can be seen as a big step in the right direction for the Chinese judiciary regarding intellectual property, regardless of the country of origin of the plaintiff," the Telegraph cited Hussey as saying as well.

Windup radio inventor Trevor Baylis, who champions the rights of inventors, also welcomed the ruling and wrote to Fu Ying, former Chinese ambassador to Britain, to express his "thanks and gratitude" for the court's decision, according to the Mail online.

The court's decision to back the British firm rather than native businesses was a positive sign for future relations, Bayliss said.

"It means that we can trust the Chinese," he said.

"Effective enforcement of intellectual property rights in China is a key concern of the many small UK businesses and there is a widespread belief that enforcing rights in China is a challenge for foreign companies. This decision demonstrates it is not so," the 72-year-old told the Telegraph.

The Wall Street Journal also cited the case as an example that "foreign companies can also win in Chinese courts".

The Financial Times online Chinese version carried a reply from reader Ervin Xiong from Britain, who wrote that intellectual property courts on the front lines in civil and commercial law have more independence than administrative hearings and criminal courts.

"Knowing that the courts will listen to (intellectual property cases) in an open and honest manner is a huge step forward," said Hussey from Strix.

But progress in the judicial system cannot be judged by whether foreign companies win or not, Yi Jun, the presiding judge in the case, told China Daily in a telephone interview.

"In my court, the parties involved in a dispute are treated alike for justice, regardless of what nationality they are," Yi said, citing "equal treatment" as one of basic principles in cases involving foreign companies.

"Maybe it happened to be an expected ruling for some of the overseas media, so they are happy with it," said Yi, who has been working with Beijing No 2 Intermediate People's Court for nearly 16 years.

"Yet as a matter of fact, judicial protection for intellectual property in China has long been progressing in various aspects like improvement in laws and regulations and joint efforts between administrative and judicial protection," he said.

"We are advancing steadily in intellectual property protection, if not in great strides," Yi noted.

He said foreign investors do not have to worry about their legitimate interests, which will be protected under Chinese laws or according to international agreements that China has signed.

Yi cited ample evidence, choice of attorneys and understanding of the Chinese judicial system as contributing factors in the final results.

Due to negligence in patent applications, insufficient market research and lack of knowledge about Chinese IP protection - and lengthy procedures within corporations - many Western companies harm themselves, wrote Ian Havey, chairman of the IP Institute in Britain, in the Chinese version of the Financial Times.

Judge Yi said the large judgment in compensation was based on the damage caused by the defendants' infringements. He noted previous cases to demonstrate that high compensation is not rare in recent infringement lawsuits.

In the Strix case, defendants failed to provide records of their sales even after the plaintiff applied for evidence preservation, said the judge.

As a result, the court took production and sales figures claimed in their own websites as the basis to calculate damages done to the plaintiff, Yi explained.

The patent involved in the case was Strix's core technology, Dong said, adding that defendants' repeated infringements, large production capability and failure to provide accounting books in accordance with evidence preservation rulings all contributed to the final sum in compensation.

Both sides have lodged appeals of the decision disputing the amount of the judgement, the judge said.