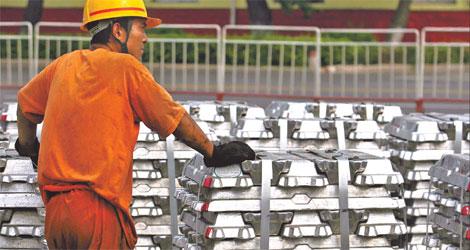 A worker loads imported aluminum at Qingdao Port, Shandong province. Chalco projects global aluminum prices will fluctuate between $2,000 and $2,400 per ton for 2010, and between 15,500 yuan and 18,000 yuan per ton in the Chinese market. [China Daily]

SHANGHAI -- Aluminum Corp of China Ltd (Chalco), the largest producer of the metal in China, has moved into the black in the first two months of this year after posting a loss in 2009, buoyed by price hikes for the metal and effective cost-cutting measures.

Chalco, one of the world's largest aluminum and alumina producers, posted a worse-than-expected net loss of 4.64 billion yuan ($680 million) in 2009, compared with a net profit of 19.5 million yuan a year earlier.

"We'll still face challenges this year, but expectations of quick growth in the property and transportation sectors, which consume more than 50 percent of all aluminum products, will propel demand and boost prices for our products," Xiong said.

Global alumina consumption is expected to hit 78.4 million tons this year, while domestic markets are forecast to gobble up 35 million tons in 2010.

Xiong said that he is confident the company will improve its performance this year on a recovering economic environment.

"We estimate Chalco will be profitable this year given the still robust growth in the real estate and auto sectors," said Zhu Lida, a non-ferrous analyst at Northeast Securities in Shanghai.

Zhu is projecting the company's earnings per share will reach 0.015 yuan this year, compared with 2009's minus 0.34 yuan per share.

The top regulatory body has approved Chalco's plan to raise up to 10 billion yuan in a March share placement to develop alumina projects mainly in Chongqing and Zunyi, Guizhou province, that will generate 2.35 million tons of production capacity per year.

Analysts said that the company would directly reduce its financial costs through the private placement.

Chalco's parent company Chinalco signed a $2.9 billion agreement this month with Anglo-Australian miner Rio Tinto to jointly develop an iron-ore project in the West African nation of Guinea after an earlier deal between the two - valued at $19.5 billion - fell through.