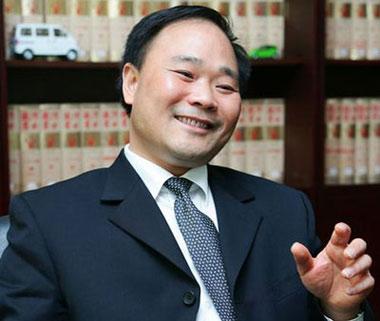 But he also has an equally big opportunity: the chance to use the foreign brand to ramp up sales in the world's largest car market.

China, which overtook the United States as the world's No 1 auto market last year, has become something of a safe haven for car makers like General Motors and Toyota Motor that have been battered by a steep global industry downturn.

"China is the crucial market for Li's effort to turn around Volvo," said John Zeng, an analyst with IHS Global Insight. "If he can make Volvo profitable in China that would at least help offset losses in European operations and keep them up and running."

"Overseas markets are important for Li, too, but it's obviously not feasible to count on Europe or the US to revive Volvo."

Like many Chinese automakers, Geely hopes someday to emulate the global success of Japanese and Korean players like Toyota, Honda Motor Co and Hyundai Motor Co.

Owning a global brand like Volvo gives Geely a chance to build up its profile in China, where it is known more for small, inexpensive cars, and to catch up with its bigger State-owned rivals, who have long partnered with the likes of GM and Volkswagen, analysts said.

Shares in Geely Automobile Holdings Ltd closed up 1.5 percent on Monday, after rising as much as 5 percent in intraday trade to a two-month high on expectations that the Hong Kong-listed automaker will benefit from its parent's deal.

Geely Automobile said the parent company would sell all or part of the Volvo business to the listed company if approved by independent non-executive directors of Geely Automobile.

Li, a self-made entrepreneur who built Geely from nothing into the country's 10th-biggest car maker in less than two decades, is banking on China as a savior for Volvo.

The charismatic founder said on Monday he aimed to turn around Volvo within two years. He is already planning a factory in Beijing that will make 300,000 Volvo branded cars a year, doubling its current output.

"Geely is going to have to ask why Volvo wasn't successful in the past and what it will take to make it successful now," said John Bonnell, a senior director of strategic advisory services for JD Power Asia Pacific.

Importantly, Geely has the backing of the Chinese government, which is eager to bolster the country's young auto industry.

In a rare public demonstration for a private-sector company, Beijing dispatched its vice president Xi Jinping to Gothenburg, Sweden to attend the signing ceremony for the Geely-Volvo deal over the weekend.

"At the end of the day, Geely has to win the hearts and minds of Chinese buyers with its China-made Volvo. But Beijing's backing could get Volvo on to the government procurement list as the initial step," said IHS Global's Zeng.

Geely clinched Volvo for $1.8 billion, less than a third of what Ford paid for it in 1999.

In return, it has promised to preserve Volvo's manufacturing facilities in Gothenburg and Belgium. That could be a big challenge for Geely, a company which so far has no proven track record of running a brand like Volvo.

"The price tag looks OK and Geely seems to have lined up some banks to fund the takeover. But Volvo has been losing money for years and no one knows when it will stop bleeding," said Zhang Xin, a Beijing-based analyst with Guotai Junan Securities.

"It could get itself into a black hole financially, not to mention the cultural and operational challenges ahead," he added. "I hope it won't end up like SAIC's Ssangyong deal."

Zhang was referring to top Chinese automaker SAIC Motor's ill-fated attempt to turn around its once majority-owned Ssangyong Motor Co, which is now under court receivership in South Korea.

"We needed to make sure we had enough blood ourselves before donating blood to others," Yin Jiaxu, vice chairman of Changan's parent, was quoted by local media as saying to explain why the firm eventually pulled out of the deal.

Carlos Ghosn, a turnaround specialist who heads Nissan Motor Co and Renault SA, was also less than charitable in his assessment.

Asked what advice he would give Chinese automakers on big cross-border acquisitions, he replied: "It depends who I am talking to. If it's a competitor, I will encourage him to go ahead. But if it's a friend, I will tell him to stay away."

"Chairman Li did not just scratch his head and come up with the idea to buy Volvo," said a senior Geely executive, asking not to be identified as he is not authorized to talk to the media.

"He predicted the downturn of Detroit automakers years ago and has since been on the alert for opportunities.

"We wouldn't make a move if we did not see a big chance of success."