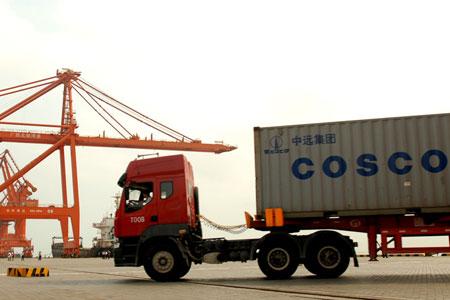 China's shipping companies are diversifying their businesses in a bid to get through an industry downturn triggered by contracting global trade and plunging shipping fees.

China Cosco Group, the world's second largest shipping company by capacity, is mulling plans to engage in overseas investments in minerals and energy resources as part of its effort to offset the volatile shipping business, the group's Vice-President Zhang Fusheng told China Daily.

"The group may consider investing in iron ore, coal or oil and, as a financial investor, we hopefully could profit from the business which can offset losses and volatility in shipping," Zhang said.

The group as a whole made a profit of 600 million yuan last year as its main business, shipping, which makes up 70 percent of its revenue, suffered a huge loss because of the global economic downturn, Zhang said.

"The possible overseas investment in mineral resources is a major step to prolong the logistics chain and diversify risks," said an analyst at Citic Securities surnamed Zhang.

The analyst said it might not bring in a strong revenue stream for the company, but it could reduce risks significantly as the carrier secures double roles as both a cargo and ship owner.

As for its two investment targets, coal and iron ore, these best suit Cape and Panamax, the two main ship types the company is operating, the analyst at Citic Securities added.

The investment plan is part of a wide range of restructuring by the carrier after the financial trouble hit the shipping industry.

The economic downturn pushed global trade down 12 percent last year, the worst since 1945, according to a WTO report.

The Baltic Dry Index (BDI), a measure of commodity-shipping costs, averaged 2,617 last year after plunging as low as 663 in December 2008. It reached a record high of 11,793 less than seven months earlier.

Zhang estimates that BDI will likely average between 3,000 and 4,000 this year.

"We want to develop logistics business in the United States and Europe, but both regions have strong restrictions in the sector," according to Zhang.

The group's logistics unit, which only accounted for 3 percent of its total revenue in 2008, generated over 600 million yuan last year, one of the few sectors reporting growth during the financially tough times.

As the largest shipping carrier in Asia, over 90 percent of Cosco's business comes from international shipping, according to Zhang.

"We will focus more on domestic shipping, including costal shipping and inland water transportation," said Zhang.