Is a currency war unavoidable?

Is a currency war unavoidable? 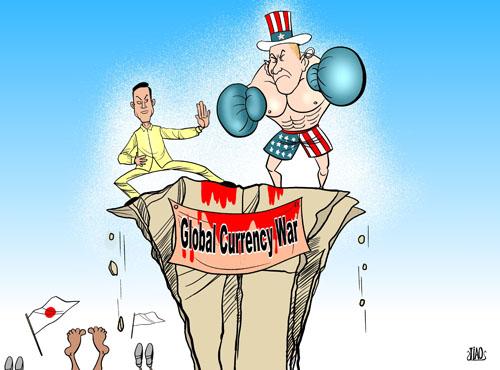 
One of the policy issues at the top of the agenda at the recently concluded G20 summit was global rebalancing. Achieving strong, balanced and sustained growth was identified by the G20 leaders as a key policy objective.

While G20 officials agreed to allow greater roles for market forces in exchange rate formulation, they also emphasized the need for structural reforms in order to resolve global imbalances. The G20 leaders must be commended for not taking the wrong policy path. The agreements reached by the G20 finance ministers' and central bank governors reduced the risk of a global currency war.

But the possibility of a currency war has not yet been completely averted. Opinion leaders in the West continue to contemplate various options for the US to wage a currency war with China. These include a new version of the Plaza Accord that would focus on exchange rate and fiscal policies in major surplus and deficit countries; punitive import tariffs; restrictions on access to the US Treasury market by countries with surpluses; countervailing intervention by the US; and the Fed flooding the world with dollar liquidity.

In my view, none of these options would be effective in addressing the root cause of the global imbalances. Some are even impossible to implement. Even if the US is able to ban China from accessing the primary Treasury bonds markets, it has not the means to restrict China from buying Treasury bills in the secondary market. Given that China is already the largest holder of Treasury debt, banning China from the market could mean significantly higher costs of capital. Countervailing intervention is even more difficult. Since China still maintains capital account controls, it would be extremely difficult for the US to source renminbi in international currency markets.

A trade war is possible, for example, through the import tariffs suggested by the Congress. But such measures would have to pass scrutiny by the World Trade Organization. Import tariffs would certainly reduce Chinese exports to the US. But, whether China continues to export to the US or the gap is filled by exports from other low-income countries, such import tariffs would lead to higher prices of basic consumer goods and probably higher inflation in the US. Given the differences in comparative advantages between China and the US, it is doubtful that the lost jobs would go to the US.