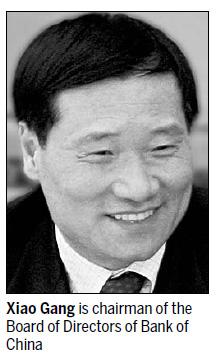 China's stake in the International Monetary Fund (IMF) has become the third largest. Malaysia's central bank has bought yuan-denominated bonds for its reserves, representing a significant step toward the internationalization of China's currency. And a pilot plan, "mini-QFII" (Qualified Foreign Institutional Investor) in Hong Kong, could create channels for overseas institutional investors to participate in the Chinese mainland's capital market.

These developments have come about because of the reform of the global financial system, and have boosted China's financial power.

Yet there is no reason to be overjoyed or complacent. China is in the early stages of increasing its influence in the global financial market, and despite being the world's second-largest economy and one of the biggest manufacturing centers, it has limited influence in the international banking system and capital markets.

For example, though four Chinese banks are among the world's top 10 in terms of market capitalization, none is eligible to be on the list of 20 "systemically important" global banks that the recent G20 summit in Seoul asked regulators to draw up so that higher capital requirements and more supervision can be imposed on them.

China has $2.7 trillion worth of foreign exchange reserves, the largest in the world. But the reserves are actually a manifestation of the country's balance sheet and not real wealth. The People's Bank of China , the country's central bank, bought US dollars in the open market by either using commercial banks' deposit reserves or printing money. In other words, the funds used to buy the dollars have come from deposits of enterprises and households. Besides, these dollar assets on the central bank's balance sheet are matched by corresponding liabilities, which means that even if the central bank can print money, it will only be another kind of liability.

So, China's foreign exchange reserves cannot be regarded as a tool of financial power. Instead of using a fiscal surplus to buy the dollars, the central bank used created liabilities to purchase them at the cost of pouring huge amounts of base money into the domestic market. Thus, neither the government nor the central bank can allocate the reserves "free of charge", and anybody who wants to use the reserves must use yuan to buy back the dollars at a certain exchange rate.

China plays the role of the biggest creditor with the highest foreign exchange reserves by investing in fixed-income securities, some of which are US Treasury securities. China is in a safer position as a creditor than it would have been as an equity owner, but it can hardly exert influence on the global financial market.