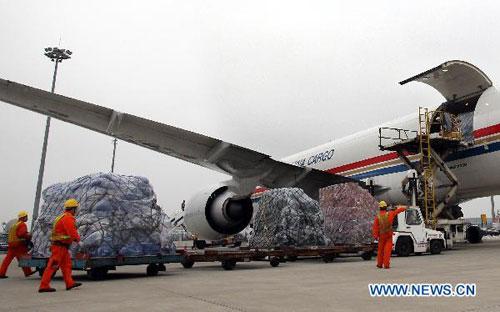 Yang said the China Eastern Airlines aircraft, a Boeing 777-200, was scheduled to touch down at Tokyo Haneda International Airport at about 8 p.m. Monday.

The ministry announced Monday that China will provide 30 million yuan worth of emergency humanitarian assistance to Japan following the massive 9.0-magnitude earthquake and ensuing tsunami that have left thousands dead or missing.

China's military was responsible for collecting this first batch of aid, as required by related emergency response mechanism and several government agencies, the Defense Ministry said in a separate statement, adding that the mission was accompolished in the shortest period of time.

China sent a 15-member international rescue team to Japan on Sunday, while local governments and China's chapter of the Red Cross have announced separate donations to aid the quake relief actions.

The rescue team started search and rescue operations Monday morning in Ofunato city of Japan's northeastern Iwate Prefecture, according to the website of the Chinese Embassy in Tokyo.