Xu Siwei, vice-president of Minmetals, said on Thursday that the company has started due diligence of the iron ore projects in the Western African nation and expects to clinch an agreement soon.

No other details regarding the investment were immediately available. 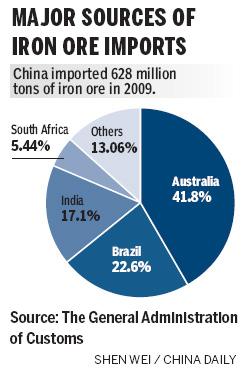 "Other international miners have also expressed interest in the Mauritania mines, but we are confident of succeeding," said Xu.

Minmetals decision to further diversify its ore supplies comes after the nation's talks with big global miners for iron ore supplies this year failed to make headway due to pricing issues.

Ore negotiations stalled after BHP and Vale said they had signed short-term deals with their customers and abandoned the annual benchmark pricing system for iron ore.

Minmetals imported 4 million tons iron ore from Mauritania through its German branch in 2009 and Xu said imports would be increased this year. Mauritania is the ninth largest iron ore supplier to China.

Yao Jian, a spokesman for the Ministry of Commerce said on Thursday that there are noticeable changes in iron ore supplies after China diversified its suppliers and reduced reliance on imports.

The nation now imports iron ore from 20 countries, compared with 15 earlier. At the same time iron ore imports have fallen to 50-60 percent from 70 percent.

"Diversification will not only help in rationalizing the market, but also aid in achieving reasonable prices," said Yao.

Earlier this month, a delegation of Mauritanian iron ore suppliers visited the Minmetals headquarters in Beijing. The two parties agreed to further promote cooperation in iron ore trade and resource exploration in the West African country.

Chinese miners will eye more investment opportunities in the higher-risk investment destinations of Africa, Central Asia and Russia as it is difficult to acquire high-yielding mines in low-risk countries like Australia and Canada this year, said analysts.

"Most of the miners in the low-risk countries have withstood the global financial crisis and are not in an hurry to sell their assets considering the recent rally in commodity prices," said Eleanor Wu, transaction advisor at Ernst & Young.