"Our next step is to apply our home-grown electric control systems and gearboxes to the two rapidly growing industries," said Kang. 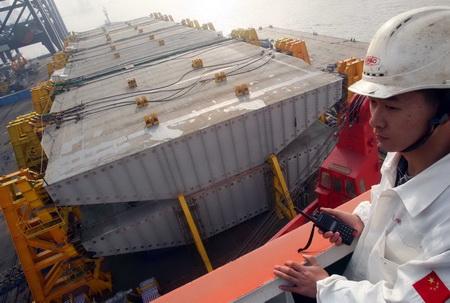 A Shanghai Zhenhua Heavy Industry Co employee supervises the loading of containers at Shanghai port. The company has a 70 percent share of the global port equipment market. [CFP]

"The market demand for high-speed rail is huge, and we are very interested in participating in this sector," said Kang.

"It's no surprise that ZPMC's has ambitions in this sector, as most of its products used in ports are compatible with high-speed trains," said Zhang Zhongjie, an industry analyst at Essence Securities.

Kang also said ZPMC is currently in talks with several firms to develop gearboxes that can be used in the wind power sector.

ZPMC has a 70 percent share of the global port equipment market, according to Kang.

ZPMC forecast in its annual report to the Shanghai Stock Exchange that its net profit would decline by up to 70 percent in 2009. The barge crane manufacturer posted a net profit of 2.55 billion yuan ($374 million) a year earlier.

The market value of the port-related sector declined 60 percent during the financial crisis, Kang said.

The company said that sales of its Global Positioning System products used in yard cranes dropped to 44 units in 2009 from 127 in 2008.

"We received more contracts during the first months of 2010 compared with the previous year, but difficulties will continue (therefore), we have to adjust our product structure this year, aiming to speed up the promotion of home-grown components with cutting-edge technologies and high added value," Kang said.

Essence's Zhang pointed out that the profit margin of components is about 20 percent, compared with 8 percent for yard cranes and 15 percent for quayside cranes.

According to Kang, components, most of which are currently made by foreign firms, account for half of the costs of integrated port equipment.

"We will make more efforts in developing components to cut the overall costs and in turn, improve our competitive edge," he said.

But the components market will take time to grow, and may not see a profit in the short term, Kang said.