GENEVA: When it came to choosing a new watch, Ma Jun had no hesitation in selecting a $6,800 Omega Constellation over a Rolex.

"Omega's designs are newer and trendier," said the 30-year-old businessman from Hangzhou, Zhejiang province. He bought the watch a month ago after seeing advertisements featuring swimmer Michael Phelps and actress Zhang Ziyi. "Rolex is old and traditional." 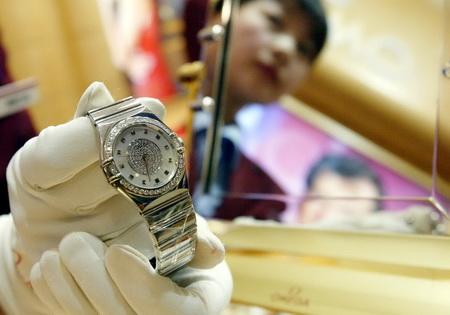 In China, a quarter of all Internet searches for watch brands last year were for Omega, compared with Rolex s 18 percent. [CFP]

Rolex, whose cheapest model is almost 60 percent more expensive than Omega's, has also been hit harder by the US recession.

"For the gorilla in the industry, you feel threatened when you have brands that are smaller than you growing fast and doing a good job," said Scilla Huang Sun, head of equities at Swiss & Global Asset Management in Zurich, who oversees about 4 billion Swiss francs ($3.8 billion) including Swatch shares.

Swiss watch exports fell 22 percent in 2009, the biggest drop since the Great Depression, as retailers canceled orders. Both Swatch Group and Cie Financiere Richemont SA, the owner of Cartier, have signaled their shipments outperformed the market, leading Rey Wium, an analyst at Nedbank in Johannesburg, to speculate Rolex's shipments dropped more than the market did.

"If these two outperformed, clearly somebody else suffered much more, and we all know it was probably Rolex," Wium said. "These things are notoriously difficult to gauge, but Rolex definitely lost out in terms of sales to retailers."

Both brands are showcasing their latest models at Baselworld, the biggest watch fair, which started on Friday in Basel, Switzerland.

Omega is one of 18 brands belonging to Swatch Group, which also produces $50 plastic Swatches and double-tourbillion Breguet timepieces for more than $700,000.

Omega, whose entry-level watches cost about $2,500, gets 35 percent of sales from China, Jon Cox, an analyst at Kepler Capital Markets, estimates.

The brand is sold in about 80 outlets in the country. Rolex watches, which start from about $4,100, can be found in 280 Chinese stores. Rolex gets about 5 percent of sales from the nation, Cox estimates.

In China, a quarter of all Internet searches for watch brands last year were for Omega, compared with Rolex's 18 percent, according to IC Agency, which analyzed 500 million search queries in a study of 10 countries.

Geneva-based Rolex, which is owned by the Hans Wilsdorf Foundation, got about a third of revenue from the United States before the credit crunch, Kepler's Cox said.

The US had the biggest drop in Swiss watch shipments in 2009 among the 10 nations that imported the most, declining 38 percent. Omega relies on the US for about 10 percent of its sales, Cox estimates.