China must strengthen its trade regime

China must strengthen its trade regime

A trade war looms between the United States and China. The U.S. is targeting China's financial sector, although the manufacturing sector is the scapegoat, i.e., the made-in-China label. Thus far, because of the on-going currency conflict over China's RMB exchange rate, the Chinese export industry has been seriously damaged as increasingly manufacturers go bankrupt. Made-in-China has been good to American consumers for a long time, but American producers and politicians are attempting to eradicate it. 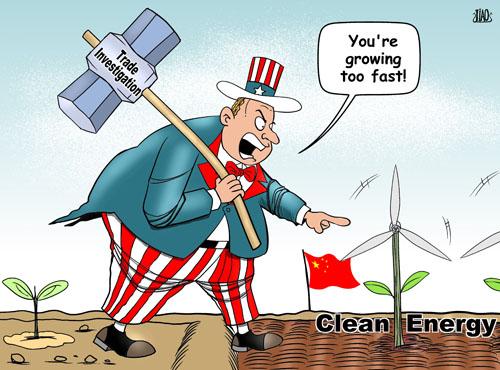 Beggar my neighbor [By Jiao Haiyang/China.org.cn]

In the past two decades, US presidents have treated trade issues as domestic policy rather than foreign policy. In some cases, they've provided protection for individual industries at the cost of jeopardizing bilateral relations. Obama's use of Section 421 last year is a good example. Citing it, Obama imposed additional duties on import tires from China. There is no doubt that private and political interests were involved in the decision-making process.

As noted, the private sector in the U.S. is a key player in this trade war. Historically, the private sector has had a powerful impact on US trade protection. US law contains an institutional protection regime that allows any "interested parties," from producers to labor unions, to request the initiation of anti-dumping or countervailing investigations.

The current trade dispute is about the US trade-protection regime. US law and administrative procedure contribute to trade protection, which have created institutional advantages for the U.S. to win trade disputes. The US mechanism of fair trade has provided privileged administrative procedures for domestic businesses and industries to actively file petitions against foreign competitors. By law, if the preliminary determination is affirmative, the US International Trade Administration (ITA) will require a cash deposit of estimated duties for all related imported merchandise. Furthermore, the ITA can continue the investigation and make a final determination. This process creates extremely high costs for foreign businesses, and eventually may block them from the US market. In addition, the US International Trade Commission (USITC), as a government agency determining imports injury, is more likely to be receptive to petitions from domestic interests, and its six commissioners tend to satisfy the President's domestic political needs.

In contrast, it is rare to see an interest group deeply involved in a trade policy in China. Government agencies have taken every effort to passively cope with trade issues raised by the U.S. In most cases, China pays too much and gains too little. The US applies and imposes its own standard, but the US fair trade standard is not fair. Trade disputes between the U.S. and China demonstrate that the competitiveness of the U.S. is not about its economy's size and strength of trade, but about its trade protection regime and institutions. Consequently, the critical determinant of a trade war is not the interdependence of the US-China economy, but the strength of trade protection institutions. China and the U.S. do need each other, but what China needs more is to build a stronger trade regime. In this context, a trade war between the U.S. and China is a war between the two trade institutions under two political regimes.

Trade protection is not trade protectionism. Today, China is a large trading nation, but not a powerful trading nation. The lack of sophisticated trade protection regime will be a leading obstacle for China to become a powerful trading nation. In the future of China-US bilateral commercial diplomacy, it is not simply to what extent the government itself can do, but how much an individual industry and other interest groups have been involved. If China continues to act without a sound trade regime that involves the private sector, China may put itself in a disadvantage in global trade.

The author is a columnist with China.org.cn. For more information please visit: