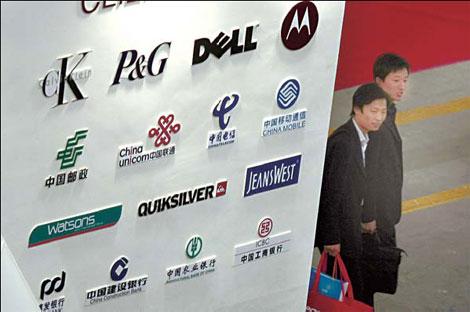 Two people walk past a billboard advertising various brands including China Mobile, ICBC and the China Construction Bank. The three companies have recently been listed among the ranks of the Top 100 Most Valuable Global Brands 2010, according to the global market research and consulting firm Millward Brown. An Xin / China Foto Press

BEIJING - The likes of Google, Apple, Microsoft and McDonald's had better watch out.

Major Western brands are unlikely to be able to bestride the globe in the same way they have done over the past 100 years or more.

Many of the new brands of the future are as likely to come from emerging markets such as China, Brazil, Russia and India as from current developed markets.

According to the recent Brandz Top 100 Most Valuable Global Brands 2010 survey, produced by global market research and consulting firm Millward Brown, 13 of the world's leading 100 brands are from emerging countries, compared with just one four years ago when the survey was first produced. 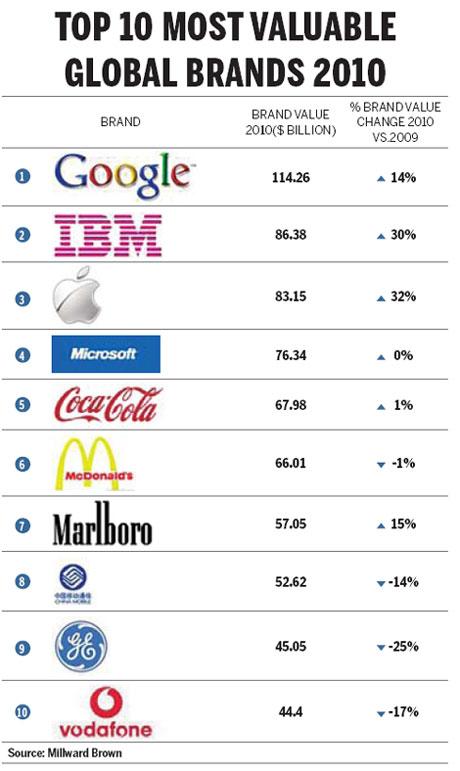 China has seven in the top 100 with China Mobile heading the list in eighth position with a brand value of $52.6 billion, closely followed by ICBC in 11th spot, valued at $43.9 billion.

The list also featured for the first time an Indian brand, ICICI, India's largest bank, as well as ones from Russia, Brazil and Mexico.

Some experts believe companies from emerging markets are making major inroads because they are learning how to harness new opportunities provided by the Internet, enabling them to target customers precisely using social networking sites and viral marketing techniques.

The new technologies are enabling them to reach customers without the massive scale of investment normally required to achieve a global presence.

Martin Roll, chief executive of VentureRepublic, a brand consultancy based in Singapore, said companies from emerging markets were proving to be very successful in using the new technologies.

"The face of business in emerging markets is changing faster than one can blink one's eyes. Emerging market companies that used to be back-end workhorses, manufacturing consumer goods cheaply for Western companies, are slowly realizing the benefits of brands and innovation," he said.

"From a brand building angle, digital and new media are providing a much faster and cheaper means of building and sustaining brands in global markets. All in all, these developments are then in turn fostering new brands to think differently as the digital platforms are enablers for them."

Zhang Tianbing, partner in international management consultants AT Kearney in Shanghai, believes what is happening is fundamental.

A Chinese company that has managed to establish a brand in overseas markets is telecommunications operator ZTE Corporation.

The company, which has 62,000 employees, 10,000 of them working abroad, supplies its products and services in around 140 countries.

Although very well known in its field, it supplies mainly in a business-to-business market.

Gu Yongcheng, general manager, corporate branding and communication, for ZTE Corporation, said there was a difference between establishing a brand in Asian markets and in Europe and North America.

"In emerging countries like in Asia and Africa we tried to establish our brand by selling high-quality and low-cost products," he said.

"The developed markets of Europe and North America impose higher requirements on our brand and we are focusing our efforts on enhancing our brand management capability right throughout the whole organization."

Gu said it was not necessarily easier for Chinese companies or those from emerging markets to build a business-to-business than a retail brand.

"Business-to-business and business-to-customer models run in quite different ways. Unfortunately, no Chinese enterprise has been successful in either," he said.

"To create world-class brands, Chinese companies need to shift completely from the traditional product-marketing concept to the brand marketing one, which requires a process of consistent brand building and continuous investment. This is something we are actively doing."

James B. Heimowitz, president and chief executive officer, North Asia, of global public relations consultancy Hill & Knowlton, based in Hong Kong, is skeptical that being able to use new technologies to communicate with customers has been behind the success of emerging market brands.

"I don't buy that technology is a leveler. Whatever technology enables you to do, if you want your brand to succeed you still have to get close to your customer. There is no substitute for that," he said

"If a company from an emerging market knows what is important to consumers in a particular market and what resonates with them, it will prove more important than whether the digital world is more cost-efficient or seen as more hip."

"It may be, however, that companies from emerging markets that are not so dependent on traditional channels of communication might be more open to what customers have to say and how they want to be communicated with."

One company that has been able to develop a worldwide brand is Brazilian company Sao Paulo Alpargatas, which makes the famous flip-flop shoes Havaianas.

It cleverly built its brand by getting celebrity endorsement such as film stars to wear its products at Oscar night parties.

It didn't begin exporting until 2001 but now competes head on with the major shoe brands. Around 22 million pairs are exported every year.

Dominique Turpin, professor of marketing and strategy at IMD, the international business school based in Lausanne, Switzerland, said the company demonstrated just what brands from emerging markets could achieve.

"At the center of Havaianas' success was the formula used by most other successful new brands, wherever they are based - a dedicated, persistent and committed group of people created an innovative brand that is genuinely meaningful to customers," he said.

Turpin agreed new technologies did enable brands from emerging market countries to promote their brands but they are insufficient on their own.

"Of course you can use viral marketing and other forms of communication but there is a minimum amount of traditional communication that you need to have, whether it is advertising or public relations," he said.

"The only way you can create awareness of a product or service is to put a bit of money behind it."

Roll at VentureRepublic said emerging market brand owners are always having to some extent play Western companies at their own game.

"Marketing is actually a Western concept. It is largely an American idea and I think some of the best marketers you find worldwide come out of America for very good reasons. To be successful, you have certainly got to be professional," he said.

Roll said many Asian companies still fail to see the importance of brand marketing, regarding it as something of an add-on rather than being core to the entire proposition.

"They really need to change their mindset that branding is not an appendix or a luxury but a necessity that is going to be one of the key drivers of your business," he said.

He added one of the problems in Asia, in particular, is that businesses tend to be started by technocrats or people with a financial background, rather than with any experience of marketing.

"They tend to be very manufacturing driven as a result. This kind of experience serves you very well when it comes to running tight supply chains but it doesn't help in finding out what resonates with global customers," he said.

He added the real Asian success stories such as Korean electronics manufacturer Samsung have managed to dominate global markets because they have grasped the importance of investing in marketing.

"In Samsung you find the chief marketing officer at the very highest level within the organization. Marketing people do need to be elevated to the boardroom and not hidden somewhere in the third or fourth level of the organization," he said.

Turpin at IMD said that without this sort of focus on marketing, brands from emerging markets are likely to be seen as second rate and encounter a lot of prejudice.

"If in a lucky dip you won a free trip to Hawaii and had the choice between flying with Lufthansa or, say, Azerbaijan Airlines, which one would you pick? Even for people who haven't flown with Azerbaijan Airlines a certain stereotype comes to mind," he said.

"This is something China comes up against with people thinking their goods are cheap and relatively low quality. It is something the Japanese and Korean companies whose products were once thought of in this way have managed to overcome over time," he said.

Heimowitz at Hill & Knowlton said one of the difficulties for Chinese companies was dealing with international perceptions about quality control that can have an impact on all brands.

"Companies are still having to rebuild from problems China had a year or two ago with contaminants in milk and other products," he said.

"I think this impacts more on China food products than for companies like ZTE or Haier, for example."

He is confident Chinese brands will be able to overcome negative perceptions over time.

"Once consumers become familiar with Chinese products and Chinese manufacturers become more consistent in their ability to manufacture and distribute quality products then China will move up the quality and brand chain as well," he said.

Heimowitz said whatever form of communications they used to raise the profile of their brands, those from emerging markets had many advantages over established western companies.

"They can start from a blank sheet of paper almost. If you were an established middle market cosmetics brand, for example, it is very difficult to convince people you are a luxury brand. As a Chinese brand going into a particular market you have a chance to position yourself where you like so long as you can stand behind the claim and deliver on it," he said.

Roll at VentureRepublic believes brands from emerging markets will use all the communication methods at their disposal to become increasingly global players over the next few years.

"Emerging market companies are increasingly looking at building and sustaining their own brands," he said.