Major stock markets around Asia fell as much as 3 percent on Friday as mounting fears over Europe's debt crisis sparked a global market rout that sent safe-haven assets soaring. 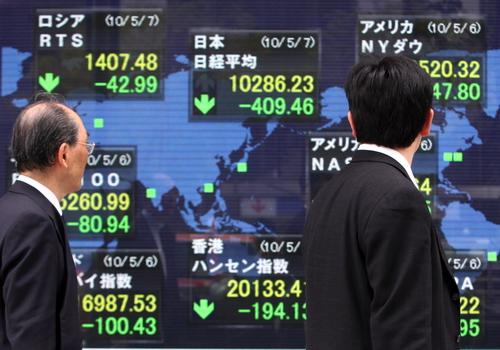 Pedestrians walk past an electronic stock board outside a securities firrm in Tokyo. Major stock markets around Asia fell as much as 3 percent on Friday. [TOMOHIRO OHSUMI / BLOOMBERG NEWS]

The tough market conditions dampened the Hong Kong debut of French skincare products retailer L'Occitane International SA, which fell as much as 8.5 percent in morning trade.

"Investors are cautious to invest in IPOs given the uncertain stock market," said Self Li, head of mutual fund sales in Asia at Baring Asset Management (Asia). "Underwriters are not willing to take risks to launch deals when they draw insufficient demand." However, South Korean car parts maker Mando Corp braved the turmoil and got its IPO away, priced at the middle of the indicative range.

Tian Yuan elected not to proceed as shockwaves from Greece's debt crisis continued to ripple across the globe, compounded by what appeared to be a trading glitch on Wall Street that at one stage on Thursday knocked 1,000 points off the Dow Jones industrial average.

"The IPO has been postponed indefinitely due to technical reasons," said the memo sent from one of the banks involved and forwarded to Reuters from an investor seeking to invest in the Tian Yuan IPO.

While the mention of "technical reasons" did little to offer clarity, what is clear is that a combination of factors has led to stock and bond markets globally to sell off in the last few weeks, fed by fears of a deepening debt crisis in Europe, and property tightening measures in China.

IPOs around the world are being cancelled, highlighting potential difficulties for upcoming deals including Agricultural Bank of China. The fourth-largest bank in China plans to raise $30 billion from Hong Kong and Shanghai in July.

Another mega-deal facing uncertainty is a $21 billion cash call by Britain's largest insurer, Prudential, which hit a last-minute regulatory snag this week.

The delay in issuing the deal's prospectus has put the audacious takeover of AIA, AIG's Asian arm, on ice and threatens next week's planned listings in Hong Kong and Singapore.

Sources involved in the Pru-AIA deal said they expect the prospectus to be released later on Friday.

On Thursday, conglomerate Swire pulled plans to raise up to $2.7 billion through a Hong Kong IPO due to deteriorating market conditions, while the listing of Americold Realty Trust, the biggest US IPO of 2010, was also pulled.

Tian Yuan had planned to raise up to $456 million by offering 600 million new shares at between HK$4.10 and HK$5.90 apiece. The company declined to comment.

Jitters over financial markets may weigh on the IPO market for the time being. But plenty of market liquidity should lead South Korean institutions to keep chasing new floats.