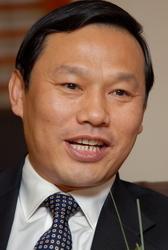 "Now the 2010 iron ore price talks are still going on, and steel mills around the world are importing iron ore at temporary prices," said Ma Guoqiang, general manager of Baoshan Iron & Steel, the listed unit of Baosteel, during an online earnings briefing on Wednesday.

The company is also studying the impact of different pricing mechanisms and how to respond to them, said Ma.

"The pricing mechanism has seen changes. If it disappears altogether, it will have a definite impact on the company's production, operations and customers. To handle these changes, the company is conducting research into the impact of different pricing mechanisms and how to respond to them," said Ma.

Until this year they sold ore at an annual benchmark price, a system that has collapsed and given way to quarterly pricing.

Baosteel, which produces 50 percent of all auto-sheeting for the domestic market, is running at full capacity as supply falls short of demand.

Although the company's auto sector orders are full, he said steel demand has slowed recently after excessive growth.

Ma said car production in China is slowing down after a 50 percent gain in the first quarter.