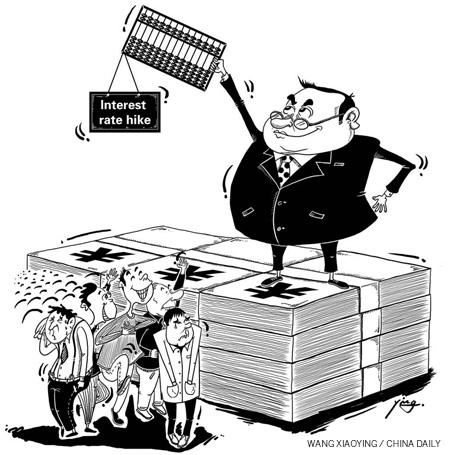 The People's Bank of China (PBOC) delivered a jolt to global markets when it unexpectedly raised interest rates last week. Never mind that the small increase will have a negligible impact on China's economy. Even after the move, banks are charging companies less than 6 percent to borrow for a year in an economy in which output is growing at a yearly rate of well over 10 percent. At these rates, demand for credit will remain strong.

Never mind too that no one is clear what exactly was on the mind of the PBOC, China's central bank, when it announced the policy move. The first explanation most turned to was that consumer price inflation was rising too fast. But inflation only edged higher last month, and that was because of rising food prices. For everything apart from food, inflation has been falling since July.

It is hard to see how raising interest rates will help bring food prices into line - the recent price gains have been because of crop damage, rather than any surge in demand, and shortfalls in supply should prove short-lived.

Perhaps officials are worried about asset prices and want to cool investors' spirits. Yet China's share markets have been among the world's worst performers this year. Property prices have begun to pick up again. But if the goal of the PBOC was to halt their rise, it would have made more sense to raise minimum mortgage rates rather than the interest rates on all deposits and loans.

A third trigger might have been the recent pick-up in bank lending. Banks extended far more loans in September than in either of the two months before. If they were to stand any chance of meeting the government's annual loan quota, banks should have been slowing the flow of credit.

There probably is something in this third explanation. Even if inflation is not a pressing concern now, officials would still be right to worry that a new wave of lending could trigger inflation or rapid asset price gains a few months down the line. The increase in interest rates came a week after reports that the central bank had increased reserve requirements for a number of major banks, in effect squeezing their ability to lend. This was a punitive measure that singled out individual banks officials thought had let lending get out of hand.

But the PBOC usually turns to raising interest rates as a last resort if the alternative measures of raising reserve requirements and leaning on banks to slow lending have failed to have the desired effect. In this case the PBOC had only just started with the usual approach - reserve requirements had been steady since May and it was the hands-off approach of regulators toward bank lending that led to the late-summer loan surge in the first place. In other words, none of the usual motivations for a rate hike is totally convincing this time.

There is an alternative possibility, that the rate move was driven not by concerns over overheating but by a desire to tackle distortions in the structure of China's economy. The low interest rate level has been one factor in the extremely skewed pattern of growth in China over recent years.