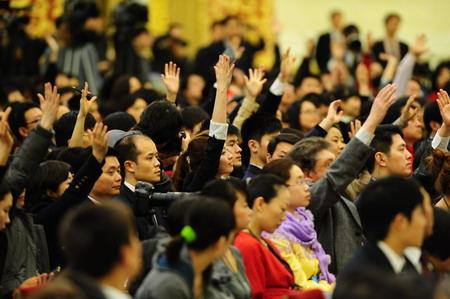 Journalists raise their hands to pose questions to Premier Wen Jiabao at the news conference at the Great Hall of the People in Beijing on Monday. [Photo: Xinhua]

The Chinese government is working on more detailed rules to promote the development of the private economy, Premier Wen Jiabao said on Monday.

At a news conference following the conclusion of the annual parliamentary session, Wen said the country aims to achieve sound development in the private sector while promoting development of the State-owned economy.

Private investment makes up more than 50 percent of the total investment in fixed assets. Among industrial enterprises, the private sector has exceeded the State-owned sector in the number of firms, output value, total assets and number of employees, according to Wen.

Although the State-owned sector has a lower proportion of the total economy, it still holds the country's economic lifeline, he said.

"Constantly deepening reform of State-owned enterprises, especially through the establishment of a modern joint-stock enterprise system, also absorbs a lot of social and private capital, which is conducive to the development of the State-owned economy.

"We must unswervingly adhere to the two sectors, to boost joint development of both the State-owned economy and the private sector," he said.

These guidelines lowered the threshold for the private sector, but without detailed policies, different regions and ministries carry out the guidelines in different ways, preventing them from realizing their benefits, Liu Yonghao, president of New Hope Group, told China Daily.

Their registered capital has surpassed 19 trillion yuan ($2.9 trillion) with an average growth rate of 20.1 percent every year, he said.

However, private industry will come under greater pressures in the next five years as inflation increases, labor costs rise and trade protection measures from foreign countries increase, said Huang. Moreover, "financing difficulties will still be a crucial problem".

Liu Mingkang, chairman of the China Banking Regulatory Commission, said on March 8 that the regulator will continue to encourage banks to hand out small-business loans by improving regulatory framework and risk management.

But the demand for small-business loans is still much higher than the supply from banks, leading small businesses to turn to loans with higher interest rates from non-bank financial institutions, said Katie Chen, associate analyst of Moody's Investors Service.