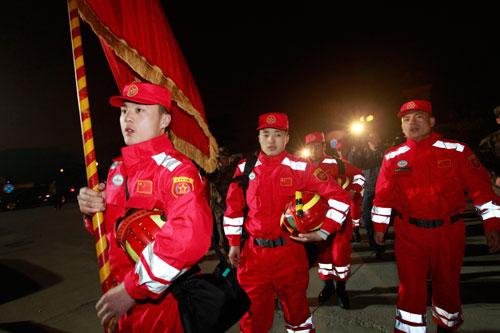 A Chinese rescue team is prepared to leave for the quake-hit Japan on Sunday morning, March 13, 2011 from the Beijing Capital International Airport. [Photo: Xinhua]

A Chinese rescue team left at 8:17 a.m. Sunday (Beijing Time) for the quake-hit region in Japan.

The team is made up of 15 members and is expected to arrive at Tokyo's Haneda Airport three to four hours later by an Air China chartered plane.

Yin Guanghui, an official of the China Earthquake Administration and also head of the team, said that the team's main task was to search for survivors.

The team brought with them four tonnes of materials and equipments for search and rescue as well as power supply and telecommunication services, Yin said.

At least 1,000 people were believed to have lost their lives to Friday's catastrophic earthquake in Japan and the following devastating tsunami.

Many members of the Chinese International Search and Rescue Team (CISAR) had previously participated in the rescue missions after Indonesia's tsunami disaster and earthquakes in Haiti, Pakistan and Wenchuan in southwest China.

The CISAR, founded in 2001, consists of 480 members from engineer troops, medical staff and experts of rescue operations.