Alcoa on the prowl for M&As in China

Alcoa on the prowl for M&As in China 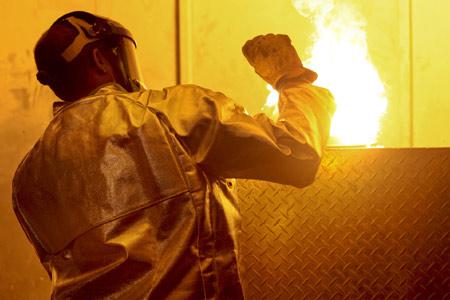 A worker takes the top off a mold at the Alcoa Howmet Industrial Gas Turbine and Structural Castings plant in Hampton, Virginia. At present, Alcoa has 26 smelters scattered around the world. [Agencies]

BEIJING - Aluminum producer Alcoa Inc will enhance its position in China through strategic partnerships and possible mergers and acquisitions (M&A) with competitors and peers, a top company official said on Tuesday.

At the same time, Alcoa would also look at acquiring or forming partnerships with Chinese aluminum producers who have access to hydroelectric dams or other sustainable green programs.

"We have always considered going upstream. It's a continuous process for us to talk to potential parties (for possible tie-ups or acquisition). A potential partner has to live up to our sustainability image," said the CFO.

At present, Alcoa - the world's third-largest aluminum producer behind Rio Tinto Alcan and Rusal - has 26 smelters in different locations across the world.

No specific timeframe has, however, been set for the deals. Lau said Alcoa could also consider an organic growth path or a combination of organic and inorganic growth.

Owning a smelter in China will help Alcoa to move its operations upstream, a process that involves mining and refining of bauxite, the most commercially mined aluminum ore.

Bauxite ore is refined into a white powder called alumina, which in turn makes the aluminum used to produce the world's cars, planes, houses and mobile phones.

Alcoa is currently involved in the downstream process, which involves smelting, casting and fabricating.

A smelter that has access to hydroelectric source translates to low energy costs. Historically, the most lucrative aluminum smelter plants have been located near hydroelectric dams or have access to large reserves of cheap natural gas.

She said global aluminum consumption is forecast to grow by 10 percent this year, with growth largely driven by China.

Partnerships with Chinese producers are not uncommon for Alcoa.

On Feb 12, 2009, Alcoa and Aluminum Corporation of China announced that they would jointly explore opportunities to expand their commercial relationship.

Prices for aluminum have been moving upward since the first quarter of 2009, largely on strong Chinese government stockpiling, hedge fund demand and a weak US dollar.

Aluminum prices is likely to correct from current levels, but it's not expected to return to the low prices of late 2008 and early 2009. Some of the gains since then will last, said a report by Moody's Investors Service.